Our team is devoted to offering warm hospitality combined with intricate yet humble dishes. Our passion for food and hospitality is translated into tasting menus consisting of 8-12 courses that focus on locality and seasonality of ingredients in Canada. The style is contemporary Canadian with some aesthetics and technique that are Asian-influenced.

John-Vincent was raised in a traditional Italian family who centered themselves around the joys of food and company. Ambitiously at the age of twelve, he had already made up his mind to go to culinary school. During his youth, he discovered the wonders of Japanese culture. Marking the beginning of his career, he joined Japanese master chef Hashimoto, learning the true insight of the spirit of selfless hospitality, and the intricacies of Kaiseki cuisine. Adding to his resume were internships at world-famous restaurants like the iconic Noma in Copenhagen, and San Francisco’s 3-Michelin Star Benu. Feeling inspired, it was during these experiences that his Asian repertoire of ideas seemed to comingle perfectly with his love and appreciation for nature and ingredients in its purest form.

Returning to Toronto, he became a Chef de Cuisine at Toronto’s Tuscan restaurant, Tutti Matti, where he continued to draw inspirations from his heritage. Eventually, it was finally time for his own restaurant. FRILU is where he would showcase the simplicities of nature using local and seasonal ingredients, combined with the complexity and intricacy of flavors that are brought by his Asian influences. 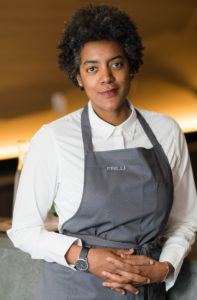 Kelli has been in the industry for two decades. Her repertoire of experience consists of Italian establishments in cities all over the world, including great culinary destinations like Melbourne and Sydney, in Australia, as well as Edinburgh in the UK. Coming back to Toronto, she worked at Tutti Matti where she met Chef Troiano. They bonded over a mutual passion for a special caliber of hospitality which is now a part of the FRILU vision.

Kelli’s passion for hospitality is undeniably contagious. The sounds of the restaurant, from conversations, to laughter, to the energy of people connecting, is what motivates her to be the warm guide and conduit that she is. She strives to give her guests moments of delight, bliss, and exploration that cumulate into a memorable dining experience. Be open to exploration and she will take you on a culinary adventure through our food. 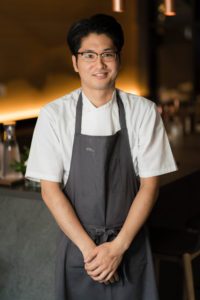 So Sakata was born in Wakayama, Japan into a family history of working in hospitality. Initially working in traditional Japanese restaurants, he made his way to Canada in pursuit of broadening his career horizons. So dove into the wonders of Italian food. He met Chef Troiano and they both instantly connected over their love for Japanese cuisine and hospitality. So is perfect for FRILU as he brings a wealth of knowledge in Japanese culture to the restaurant that complement the FRILU vision perfectly.